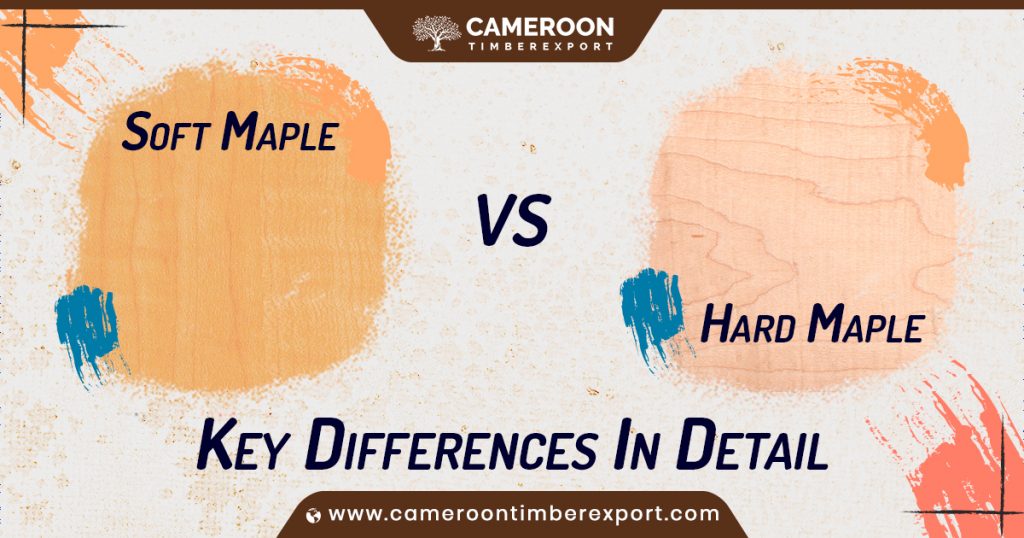 The two common types of maple are soft maple and hard maple. Besides being soft and hard respectively, as their name suggests, there are some other differences between the two types of maple, which we are going to discuss in detail here.

Maple is a versatile hardwood that is used in many applications, ranging from flooring to furniture, sports equipment, and cabinetry. Found almost exclusively in the Americas, Maple wood is famous for its affordability, durability and great looks. Hard maple, the most commonly used maple species, is very strong and moderately durable. It looks great both in natural colours and after staining. The smooth and straight grain pattern of maple makes it fairly easy to work with.

What is Hard Maple?

Hard maple species are generally harder, stronger and denser compared to soft maple species. Another thing you should know about maple is that its sapwood is more usable than heartwood. It is the sapwood of maple that is strong and durable, while the heartwood is nearly perishable. This is why maple sapwood is commonly used for commercial purposes.
What is Soft Maple?

Soft Maple isn’t exactly a species of maple, but it’s a group of a number of maple species that are classified as “soft.” Red Maple, Silver Maple, Striped Maple, Bigleaf Maple, and Box Elder are the most common soft maple species.

Soft maple species are less strong and dense and also cost much less than hard maple.

Let’s find out the various differences between hard maple and soft maple in terms of hardness, appearance, durability, properties and uses.

Now, the most basic difference between hard maple and soft maple species is hardness. Hard maple is hard while soft maple is not so much. Soft maple can be hard and strong but not as much as hard maple. It is sometimes used in place of hard maple where the strength of the wood is not a major concern.

Hardness is the best way to tell one maple apart from another.

The thing about hard maple and soft maple is that they all look practically the same and it is not easy to tell one species from another, especially in finished pieces. All maple species, including hard maple, have almost white sapwood, which sometimes might have a reddish or yellowish hue. The heartwood of maple is reddish brown. Figured grain patterns such as curly, quilted and birdseye are common in hard maple.

It is not easy to distinguish hard maple from soft maple based on appearance. Though, experts use the wood colour and endgrain to identify it.

Both hard maple and soft maple are easy to turn, glue, and finish. To avoid blotching when staining, the use of toner or gel stain is recommended.

Both hard maple and soft maple species are easily available and can be imported in all parts of the world (from a top timber exporter like CameroonTimberExportSARL). Maple is a moderately priced hardwood, though hard maple can be somewhat more expensive than soft maple species. Figured pieces of maple timber are particularly difficult and expensive to get.

Soft maple is occasionally used as a replacement for hard maple in applications where strength and hardness are not a major concern. Common uses of soft maple species include musical instruments, veneering, paper, crates, boxes, pallets, turned objects, and small speciality items.

If you want to learn in more depth about maple hardwood, its types and their differences, feel free to contact CameroonTimberExportSARL to talk to an expert. We export timber and wood at wholesale prices to our customers all over the world.

Reach us now with your queries, requirements, service question or quote requests, and we will be more than happy to help you in every possible way. Send us a message using the form below.

Ready to talk to sales?

Submit this form and a business expert will be in touch with lightning speed.

Connect with us at the following: