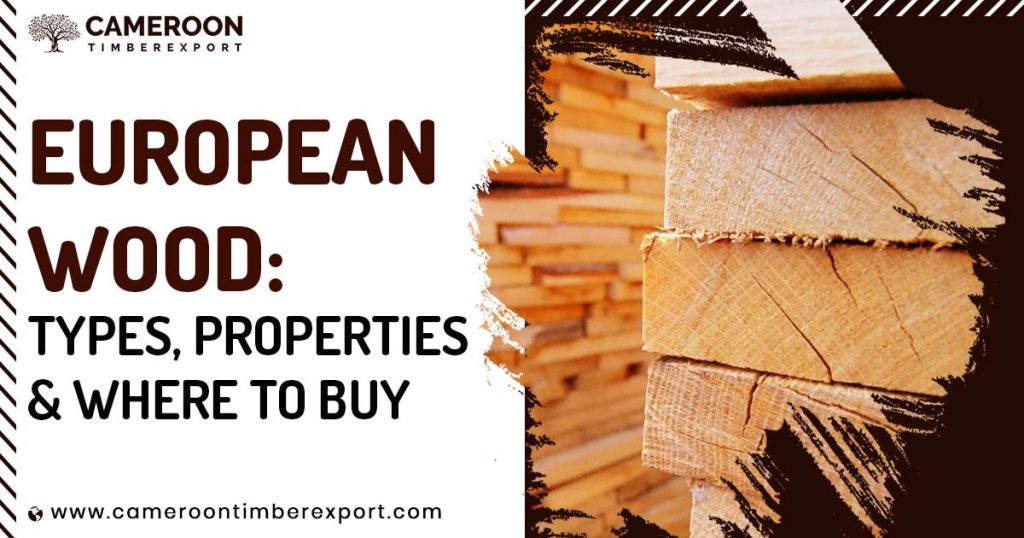 European woods consist of wood species originating from European countries, such as England, France and Germany. European woods are famously used as an alternative to American woods in many parts of the world, depending on accessibility and availability. They possess many excellent properties, especially hardwoods such as Maple which are known for durability and strength.

If you are here, you are probably looking to know more about European wood species, types and properties. Well, in this article, we talk about some of the top European wood types, including oak, beech and other European species. Let’s get started.

CameroomTimberExportSARL is a top supplier and exporter of wood timber in many countries across Europe, Asia, America, and the Middle East. We have more than three decades of woodworking experience and specialise in sustainable, great-quality hardwood at wholesale rates. Contact us to know more.

Oak is one of the most popular European woods. European oak, also known as English Oak, has a light-medium brown heartwood with an olive cast. The sapwood can be almost white but not always easily distinguished from the heartwood. Oak wood is rated as durable and resistant to decay, which makes it suitable for marine applications such as boatbuilding. The grain can be straight or interwoven depending on the growing conditions. The texture is coarse and uneven. It is generally easy to work with.

Maple is another very popular European hardwood. Also called Field maple, it is commonly found across Europe. The wood is considered hard with a 1,150 lbf (5,110 N) janka rating. Maple is particularly harvested for its sapwood, as the heartwood is not very strong or durable. The maple sapwood can be nearly white to off-white or cream-coloured with a golden hue. Curly grain patterns are also common. Maple grain is straight with a fine texture. Maple wood can be slightly durable to moderately durable depending on the growth cycle. It is generally very easy to work with.

European Chestnut, commonly known as Sweet Chestnut or Castanea sativa, is a chestnut species found mainly in Europe and some parts of Asia. It is a moderately strong wood with a 680 lbf (3,010 N) janka rating. The heartwood is light-medium brown that becomes darker with age. The grain is straight but can also be interlocked or spiral and the texture is uneven and coarse. Despite being only moderately hard, chestnut is remarkably durable, though it is prone to insect attack. It is easy to work with both machine and hand tools.

European white birch or Downy birch is found in Northern Europe and also in some regions of Asia, Greenland, and Iceland. It is a strong hardwood with a 930 lbf (4,140 N) janka rating, though durability is low and the wood is almost perishable in terms of resistance to decay, rot and insect attack. European birch has a light reddish brown heartwood and almost white sapwood. The grain is generally straight but sometimes wavy and the texture is fine and even. The wood is generally easy to work with. Priced in the same lines of oak and maple.

European Cherry or Sweet Cherry is a wood species based in Europe and Asia. It is a strong hardwood with a 1,150 lbf (5,120 N) janka rating, though it is only moderately durable. The heartwood colour varies from light pinkish brown in freshly sawn wood to deep golden brown in aged wood. Sapwood is pale yellowish. The texture is fine or medium and the grain is generally straight but sometimes wavy. Sweet Cherry can be prone to decay and insect attack. It is easy to work with both hand and machine tools.

European Beech is very strong and has a 1,450 lbf (6,460 N) janka rating, though it is non-durable and has poor resistance to insects. The heartwood is pale straw-coloured with a pink hue and the grain is straight. Beech is used for flooring, boatbuilding, veneering, cabinetry, lumber, furniture, plywood, and musical instruments.

White Ash or European Ash is a light to medium brown timber with a straight and regular grain and a medium/coarse texture. Though it has a high hardness rating, it is almost non-durable and prone to insect attack. It is used for flooring, baseball bats and other sports equipment, millwork, boxes, crates, and turned objects.

European Larch is sourced from Central Europe. It has yellow to medium reddish brown heartwood and almost white sapwood. The grain is straight and the texture is fine to medium. The wood is moderately durable and is used for veneering, boatbuilding, flooring, and lumber.

Italian walnut, Poplar and European lime are other popular European wood species. If you want to purchase European wood timber at wholesale price, feel free to contact us to enquire about the availability, price and specifications of our wood.

Reach us now with your queries, requirements, service question or quote requests, and we will be more than happy to help you in every possible way. Send us a message using the form below.

Ready to talk to sales?

Submit this form and a business expert will be in touch with lightning speed.

Connect with us at the following: